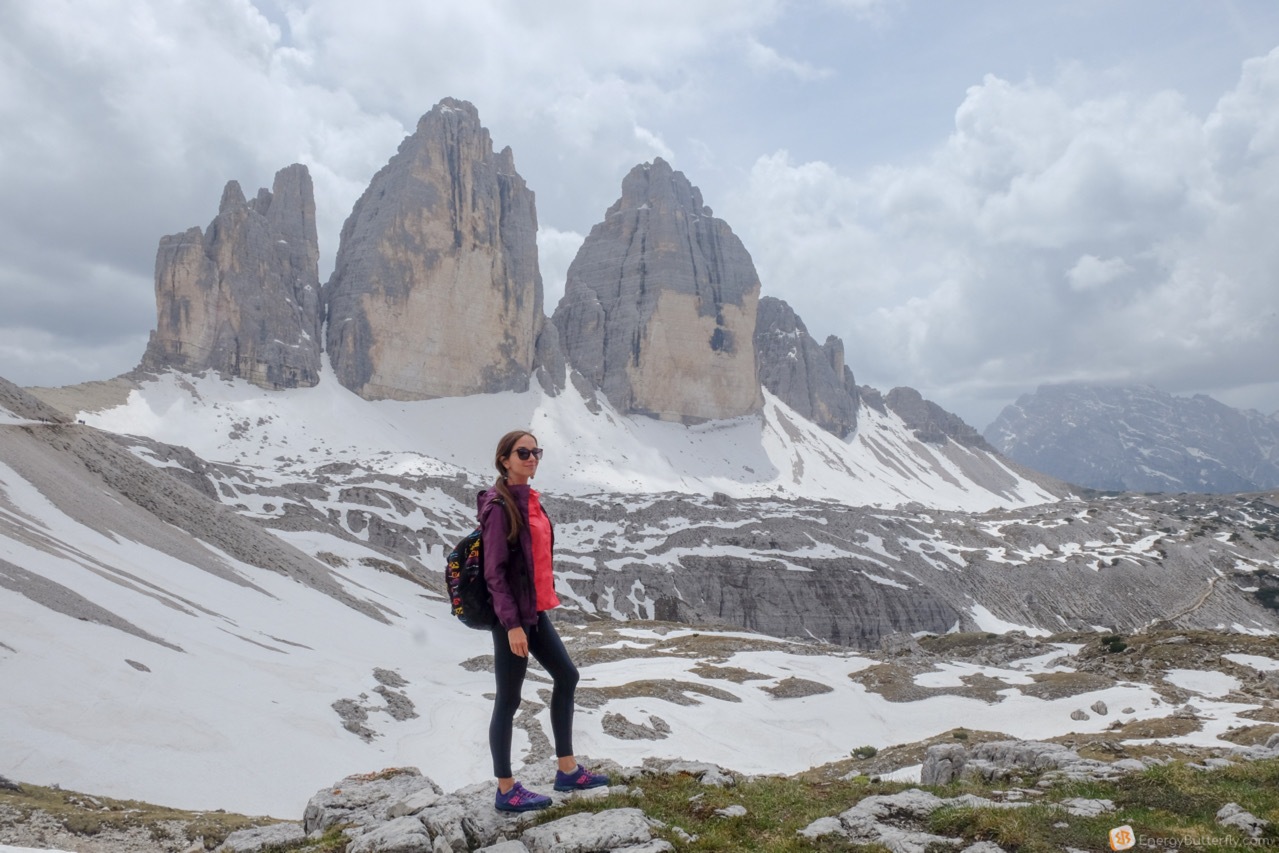 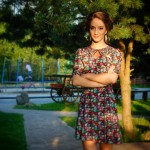 Everything you need to know before you go to Tre Cime di Lavaredo, the best short hike in the Dolomites. When to visit, where to stay and what to see?

Tre Cime di Lavaredo is one of the most famous hiking routes in the Dolomites. Three massive mountains hang over the Dolomites, surrounded by beautiful scenery.

Dolomites have always been in my dream

We bought tickets to a direct flight Lviv-Venice.

Two and a half days for our trip. You can not do unnecessary movements and just spend the weekend in Venice, Murano and the beach, but …. mountains! And also the Dolomites.

At first, I was confused, because the Dolomites are not just one or two mountains. The Dolomites – 150 km long mountain range in the Eastern Alps.
Located between the provinces of Belluno, South Tyrol and Trentino.

Mountain range is characterized by forms, rocks, ancient valleys and glaciers. The rocks are so sharp, uh!

Meaning of the name Dolomites?

This is from the French explorer Deodo da Dolomier, who discovered and explored this mountain range. Yeah, I think Dolomites are associated with the Dolomite breed – he was the first to describe MgCa (CO3).

The highest mountain of the Dolomites – Marmolada, 3.342m. There are around 18 peaks in these mountains that exceed 3k meters. There are also several national parks and many regional ones. In 2009, included in the UNESCO World Heritage Site.

It is forbidden to set up tents, drive cars / jeeps into the mountains.

During the First World War there were fights between Italian and Austrian armies. You can find various crosses, museums, one open-air is the Cinque Torri Museum and Mount Lagazuoi.

Since arriving on a Friday night, the maximum driving time should be not more than 2 hours.

Alternatively, live in Cortina dÁmprezzo, a really beautiful city in the middle of the mountains! Hence not far from Tre Cime and other locations. For our date was either expensive or not empty spaces. Another choice was between Pieve di Cadore or Colle Santa Lucia, and I chose the last one.

Found an AirBnb apartment with good reviews and location in a classic alpine village.

Our plane was delayed by one and a half hours. So we will be at Colle Santa Lucia at night ….

Car rent. This year I have already successfully booked five times a car in Avis, Europcar or Hertz. And this time decided to book in American company Alamo (they are together in one group with Locauto).

Alamo. I’ve booked a car Opel Mokka or something in that class, on the counter girl said that my card is not a credit, so either give another or they can’t give me a car … Ufff!

Booked at Sicily by Car – Fiat 500, for 200 USD and unlimited mileage. Well, this is not the new Lexus. What are other solutions? You could go to Treviso and get a car there. But it would take a long time …

Driving to the village took about two hours, through mountain road and at night. Road fare was € 8.

Arriving late to our home, I met Carla, who didn’t speak English very well, but everything was ok 🙂

So, if to take a look to the history, the Tyrol region was a part of Austria-Hungary, and even now some people speaks German.

And here is our route from Colle Santa Lucia:

Our suggestion: try to start trip earlier in the morning.

Serpentine! First pass – Passo Giau.
There is the first parking lot in front of the pass.

It is worth stopping here, looking up the mountain opposite, and from here you can see a cool serpentine road.

Then the route passes by Cortina d’Ampezzo – the famous Olympic town.

The area around Cortina d’Ampezzo is popular for its ski slopes – 140km of trails and 12 resorts!

The views over the city are great, and I recommend even finding accommodation here (although prices are higher). We just stopped to take some pictures, and visited the big Eurospin supermarket (Point C).

After Cortina rises and massive Dolomitic walls are visible.

On the way we also pass Lake Mizurina and Antorno.
They can be seen straight from the track, you can stop in the parking lot.

You can drive to the trail head on a toll road that costs EUR 30/car, which includes your parking fee in the lots at the top.

We arrived not too early, and most of the parking places were already full, and this was early in the season.

Getting ready for crazy landscapes and mountains!?

The first point is the Rifugio Auronzo, opened in 1925. In such lodges you can spend the night, similar like a hostel.

Since this is all a National Park, it is forbidden to set up a tent. If you go the Park and want to spend the night(s), then these Rifugios are for for you. Please keep in mind there are many people during the high season, so some of the Rifugio need to be booked in advance.

This is a circular route, you can move in one direction and the other. Most go east – anti-clockwise. We went the same way.

The track can be divided into 3 parts.

Cappella degli Alpini and WWI Memorial – get off the main route minimally! In the background you will have the nearest peaks, and from here you can see the valley, the river and the town of Auronzo di Cadore. . The massiveness of the three mountains is also felt!

Wow, this is just the beginning of the itinerary, and such a beauty! From here you can see very clearly the sharp harsh rocks that are to your left.

The first piece to Rifugio Auronzo is a dirt road. Many people with children, dogs, no one in a hurry.

Let’s move on! Snow 🙂
We pass by a snowy corridor, though under the feet a snow is flowing.

As we get closer to the foot of the three peaks, they hang over you! Impressive.

The border between Italy and Austria-Hungary was here. And here were the battles of the First World War – a bell tower is for it’s memory.

Rifugio Lavaredo – you can spend the night, their’s website with details, price per night 65 euro.

At the foot of the mountains, everyone stops, drinks tea, eats and just enjoys it.

Fork Lavaredo – it’s kind of a pass. Here we are closest to the peaks and can be approached even closer. The look is great on all sides!

Here the route is a bit steeper, and there was still enough snow scattering by the tractor.

The classical view to the Tre Cime

We go a little further and see many rivers and even waterfalls below. Just breathtaking!

The views are amazing! And they are constantly changing. We have Tre Cime on our left side, and our route is circular.

Next to Langealm is a cafe and of course a shelter. And another wonderful three lakes!

No time to write long texts – watch the video from the drone;)

Part 5: the last piece back to Auronzo

The last piece that runs past the cool landscapes, as well as the thin trail on the mountain slope! And be careful – it’s quite windy here

And we are also passing by Passo Giau

The pass is also known for regularly joining the multi-stage Giro d’Italia, and for amatures it is the 6th pass at the Maratona dles Dolomites.

Unfortunately not everywhere we could stop and fly a drone, but just take a look:

Arrived almost before sunset at our village of Colle Santa Lucia

For a dinner, I recommend the Pizzeria ristorante Fursil

I think for the first day of emotions and mountains is enough, and we are tired and happy to go to bed early!

Colle Santa Lucia is a very cozy village, surrounded by the mountains! By the way, very often the landscape of the church and mountains appears on puzzles, paintings and wallpapers.

After the breakfast we decided to have a short walk around the village and fly with a drone.

They moved to the neighboring village of Selva di Cadore. And you know who was there? A flock of sheep and dogs 🙂

As some cycling events took place that day and some of the Dolomites trails were temporarily closed (we were lucky to visit Tre Cime the previous day!), Our AirBnb host advised to take a short trek to Monte Crot (2,169m) past Passo Staulanza

The distance between Colle Santa Lucia is just 12 km

Parking lot is at the Rifugio Passo Staulanza, again – there is also a café and hostel overlooking the mountains.

A path that starts from the back of the refuge of Passo Staulanza, feasible in about an hour, offers an exceptional panorama

Around such amazing 360 landscapes!

You have to climb carefully to the top, there were some bushes and branches. And you know why this mountain is cool? An breathtaking view of Civetta, Marmolada, Sella, Pelma.

Pelma is just near you!

There were very few people on the whole route, which is also quite comfortable

And first, watch the drone video:

From Colle Santa Lucia there is a lovely winding road, and you can explore the Belvedere observation deck.

Oh, the mountains! When standing on a hill, the northwestern wall of Civetta Mountain (3,220) hangs over Alleghe. Climbers call that part of the mountain the “Wall of walls”, more than 1000 meters high and 4 kilometers wide.⁣⁣ ⠀⁣⁣⁣⁣⁣⁣⁣⁣⁣⁣

Just a short drive down and here we are. Alleghe

Together with the neighboring villages of Selva di Cadore, Palafavera and Zoldo, Alleghe forms the ski resort of Civetta, which is the largest ski resort in the Veneto region (80 km of ski trails and 24 lifts).

After some coffee and lunch at the central cafe right near the church our route  goes to Venice.

Spend a few hours in traffic jam, so arrived Venice in the evening ….

We lived not in Venice, but in the town of Mestre – Hotel Venezia

I have been to Venice many times, though I have not visited all the known locations. For now, I like just walking, especially in non-tourist areas.

After an evening walk back to the hotel by last bus to Mestre. Yeah, I don’t think it makes sense to go to Venice with your car – parking is expensive

After a morning walk in Venice, we went to the airport.